Education and empowerment of young people as to what constitutes a just and fair society – as embodied in Rule of Law principles – is vital to our democracies and essential in order for the next generation to become active citizens. The Rule of Law is a core societal value in many democratic nations, although it is named slightly differently depending on the country. For example, Stato di diritto (Italy), État de droit in France, Rechtsstaat in Germany and The Netherlands, Estado de derecho in Spain, Saltna tad Dritt in Malta, Jogállamiság in Hungary and Praworządności in Poland.

There is no single agreed definition of what the Rule of Law means, however all the definitions bear many similarities, such as everyone being equal before the law, everyone having access to justice when they need it and laws being transparent and clear. Also of great importance to the healthy functioning of a country is the separation of powers between the legislature or parliament (which makes the laws), the executive (the branch of government that executes and enforces the laws) and the judiciary (which interprets and applies the law, and provides access to justice). This separation of powers helps to engender trust in the system of law and government.

Given recent political events in many countries, we cannot take for granted the primary status of the Rule of Law. We are witnessing an increasing incidence of arbitrary use of power in certain European countries. There are many examples of regulations and acts that flagrantly violate human rights, democratic principles and the Rule of Law. Misunderstanding the meaning and importance of the Rule of Law and its role in maintaining a healthy society can, to some extent at least, account for the declining respect for the Rule of Law. Our preliminary investigations found that education about the Rule of Law is often lacking in secondary school, or when it is taught, it is done in a rather abstract way. Furthermore, young people are generally not empowered to challenge structures or question decisions that lead to unfair or unjust outcomes. As a result, there is a need for an innovative, informal and engaging approach to education on the Rule of Law.

ELSA Alumni has responded to this gap by initiating a Rule of Law Education program, formulating a curriculum in close co-operation with the European Law Students’ Association (ELSA), which will roll out the program through its extensive network across Europe.

The Rule of Law Education project is ambitious and far-reaching in its aims. It is an informal, extra-curricular education programme, in which law students and young lawyers from ELSA local and national groups guest-teach a curriculum on the Rule of Law at interested secondary schools throughout Europe. The project is being piloted in a number of countries and is aimed at the 15-18 year age group. 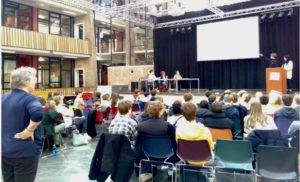 ROLE pilot at the Montessori Lyceum in The Hague.

In simple and engaging language, various Rule of Law principles are explored in an interactive way, and the link with human rights and climate justice is also addressed.

The key aim is to give young people the knowledge, skills, and confidence to engage with and advocate for the improvement of the Rule of Law in communities and countries where it is currently lacking in some way.

With the assistance of ELSA Alumni in the implementation of the Rule of Law Education project, ELSA aspires to reach at least 35,000 students throughout Europe with the Rule of Law Curriculum in the coming 5 years.

How you can help?

We are actively seeking schools that wish to participate in the Rule of Law Education project. If you are a teacher, or have contacts at a secondary school that may be interested in participating, please contact ELSA Alumni’s ROLE Director, Lisa Mead.

We use cookies to ensure that we give you the best experience on our website. If you continue to use this site we will assume that you are happy with it.OkNoPrivacy policy