Book your tickets to Vienna and…

In 1981, the European Law Students’ Association (ELSA) was founded in Vienna by four committed law students from Austria, Hungary, Germany and Poland. Since then, ELSA has grown to the largest independent law student’s association in the world. ELSA is active in 44 countries and 432 law faculties and has over 60,000 members today and is also successfully active in Austria at six universities.

ELSA Alumni connects the alumni of ELSA and is a global community of political, government, business, legal and NGO leaders.

The Vienna Summit will take place in Vienna, Austria from 12 – 14 November 2021 and will celebrate ELSA’s 40th Anniversary and the joint efforts of ELSA Austria, ELSA International and ELSA Alumni to promote a just world in which there is respect for human dignity and cultural diversity underpinned by the rule of law. The Vienna Summit will feature a high-level conference which will discuss how the Rule of Law can be strengthened. It is being held under the auspices of the Conference on the Future of Europe which is gathering innovative ideas from stakeholders on how the European Union can be more relevant to citizens. The event is – typical for ELSA – aimed at facilitating successful substantive and personal networking between active people at universities and active people in professional life, Europe’s current and future leaders.

We are looking forward to welcoming you to Vienna and celebrating 40 years of ELSA with you. The main purpose of the Vienna Summit is to bring together ELSA students and Alumni members all over Europe to build networks and to contribute to discussions with high-level speakers during the Conference about how to improve the “Rule of Law” in Europe. 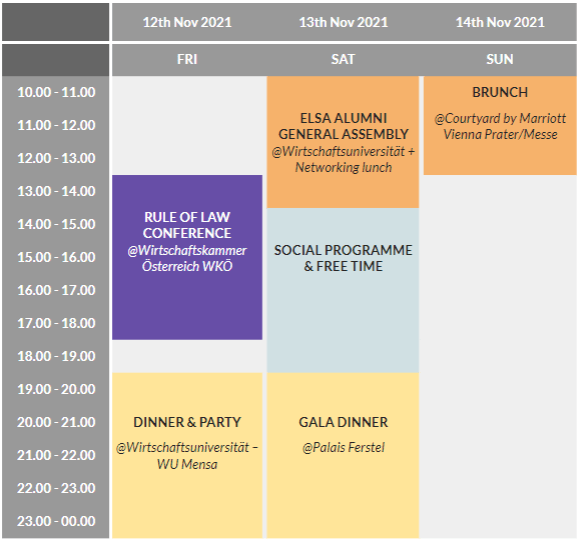 Courtyard by Marriott Vienna Prater/Messe is the conference hotel. Sunday brunch is at this hotel, all other events are either in the nearby Wirtschaftsuniversität or in the city centre. Each participant makes and pays for their own room reservation. ELSA Alumni takes no responsibility for accommodation costs.

A limited number of rooms are available at Courtyard by Marriott Vienna Prater/Messe until 12 October 2021. Prices for ELSA Alumni are: Double room 144 EUR/night and single room 120 EUR/night, including full breakfast. For special requests or longer stay, please contact the hotel directly.

NB: The ELSA Alumni rates are no longer available, but the hotel may still have rooms left. If you wish to stay in the hotel, please contact the hotel directly or use their usual reservation method.

The Vienna Summit will feature a high-level conference which will discuss how the Rule of Law can be strengthened. It is being held under the auspices of the Conference on the Future of Europe which is gathering innovative ideas from stakeholders on how the European Union can be more relevant to citizens. The event is – typical for ELSA – aimed at facilitating successful substantive and personal networking between active people at universities and active people in professional life, Europe’s current and future leaders.

We are proud that the Federal President of Austria, Dr. Alexander Van der Bellen, is the Patron of the Vienna Summit. The conference “Rule of Law” is directed by Univ. Prof. Andy Unger from London South Bank University.

ELSA Alumni General Assembly is the highest decision-making body of the association and members are welcome to attend. On the agenda are elections of the new Board of Directors as well as budget, strategy and future action plans of the alumni association.

Assembly meeting will be followed by networking lunch (nearby restaurant, to be confirmed).

Vienna offers something for everyone. Why not grab a coffee at the famous Café Landtman, or visit a museum or art gallery. Explore Vienna with old and new friends. For the daytime social programme, we will have alternative itineraries available for you to choose. Based on recommendations from our local friends, you can plan your visit. We are not planning a daytime social programme for all participants (300+) to attend simultaneously.

Friday evening invites to an exchange of generations, nations and positions. We are looking forward to an hilarious mood, informal conversations with old and new friends and, above all, a get-together at eye level. Food and drinks will be provided throughout the evening and a live band will ensure a good atmosphere. We look forward to a fun evening with you in the unconventional WU Mensa (address: Welthandelsplatz 1)!

Saturday evening is time to experience Vienna at it’s best. Gala Dinner will be served at Palais Ferstel at Herrengasse. It was originally built as a National Bank and stock exchange building in 1860. Saturday Gala Dinner location: Palais Ferstel, Strauchgasse 4

For general questions regarding this event, please contact the Vienna Summit Director, Johanna Kauppinen, via email at johanna_kauppinen@hotmail.com.

For questions regarding invoices and finance, please contact the Treasurer of ELSA Alumni, Rob van Bergen, via email at rob@elsaalumni.org.

This event will comply with all applicable Austrian COVID-19 security measures. Therefore, we kindly ask you to show each day at the entrance either a valid PCR-test result not older than 48 hours (antigen test is not suffient!) OR a vaccination certificate recognized by the EU OR a confirmation of a previous infection (not longer than 6 months ago). You also need to bring and wear at all times a FFP2 face mask. Failing to comply with these rules means that you will be refused entry to the event. Thank you for your cooperation.